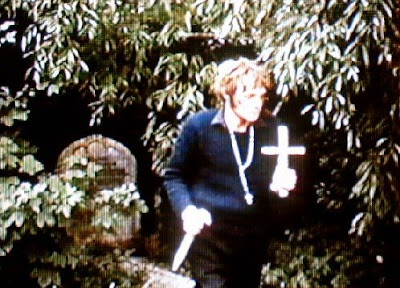 .
The inherent contradictions concerning issues raised by the self-styled lone vampire hunter turned revisionist, then and now, have never been adequately addressed by him. In the 1970s he boasted to the media that he was vampire hunting with a cross and wooden stake. He refers on these archive recordings to two occasions in 1970 where he entered Highgate Cemetery with the clear intention of impaling a vampire if he found it. There is no ambiguity in these interviews from the 1970s.
.
Today he claims that he was not vampire hunting.
.
Today he denies that he ever believed in vampires or went in pursuit of the Highgate Vampire with the intention of impaling it with a wooden stake.
.
These latter-day counter-claims, however, are seriously compromised by the interviews he gave to Thames Television's Today and BBC Television's 24 Hours in 1970 from which transmission the image of him above is taken as he demonstrated for the camera what he was doing on the night of his arrest in the previous August. Moreover, his denials are confirmed as false when listening to the long interview he gave to the Vampire Research Society in which he confirms everything attributed to him in The Highgate Vampire (1991) written by the Society's founding president where the lone vampire hunter's part at the periphery of the Highgate case prior to his imprisonment for related crimes is covered in a chapter titled "Amateur Vampire Hunters."
.
Interviews where this man talks at length about his vampire hunting exploits and all that followed are available on a compact disc titled The Devil's Fool.
.
There is also another CD titled The Black Witch Project which concentrates on his black magic proclivities and indeed activities in the company of John Pope, an unapologetic Satanist, who is also heard being interviewed.
.
The Devil's Fool disc provides clear evidence of the many contradictions over his publicly declared and disingenuous intentions in connection with the Highgate Cemetery matter at the time and, of course, subseqently.
.
Thirty-two tracks cover as many years of his recorded comments. They leave the listener in no doubt about this man's inconsistency.
.
.
Click here for further information about The Devil's Fool CD 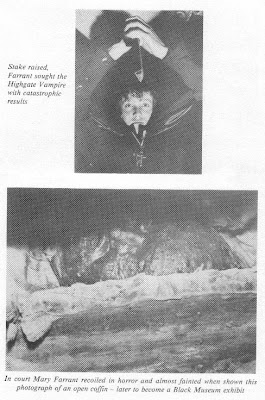 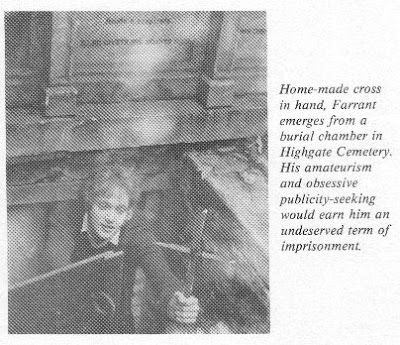 Watch a video of the lone vampire hunter turned "Luciferian Guru" on YouTube: